In terms of accommodations there’s not much in Treyarnon besides the Youth Hostel (which looked very nice to me, at least from the outside). One might get something in Porthcothan, a bit beyond Treyarnon. The route out of Padstow is around a peninsula called Trevose Head. Padstow isn’t very far from Treyarnon because the direct route cuts across the base of a peninsula. 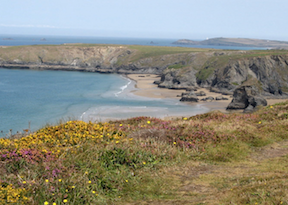 I did this itinerary back in 2007. It’s a nice walk, and I think it’s quite popular. Both St. Ives and Padstow are substantial towns that attract a lot of holiday visitors. St. Ives is known for the Tate Gallery there and Padstow is known for fine dining because of restaurateur Rick Stein. But I don’t know who Rick Stein is and I don’t know about galleries, so if you are craving information about food or art you are in the wrong place. On both of my trips to Padstow I stayed at the London Inn and dined on pub food. I didn’t starve.

If you are a fan of the British TV show Doc Martin then by all means start your trip in Port Isaac, a day to the east of Padstow and the real-life 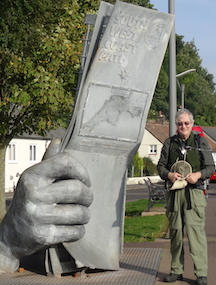 location for the fictional village of Portwenn. Port Isaac is even more quaint and charming in person than it appears in the TV show.

Given the length of the South West Coast Path, there are lots of other possibilities. The northern section at the start of the walk from Minehead to Combe Martin or Ilfracombe also seems to be popular. It’s a beautiful coastal walk at the north end of Exmoor National Park. The terrain is much more rugged than the section from Padstow to St. Ives. 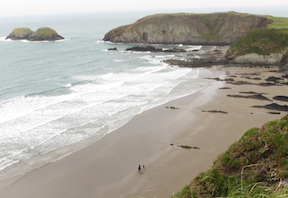 I walked this route in 1998 on a self-guided tour arranged by Sherpa. I have great memories of leaving Kingshouse in Glencoe and walking up the Devil’s Staircase to the highest point on the path and a spectacular view of the valley below. And I remember being tired and footsore by the time I reached my bed in Kinlochleven, but that’s all part of the experience. In 2011 I drove through Glencoe with my sisters and it was a very different experience from walking the same valley. On my walk I spent part of my time on the valley floor, but also got to see the whole scene from the top of the Devil’s Staircase.

The Coast to Coast Path is not an official route like the others, but it is very popular. My impression is that it had a higher proportion of non-British walkers than the other routes, although that may be true of the West Highland Way as well. The route passes through the Lake District, the Yorkshire Dales National Park, and the North York Moors National Park.1 In 2012 I walked this path from St. Bees to Richmond, and in 2019 walked the part that overlaps with the Cleveland Way and ends at Robin Hood’s Bay. It’s a good introduction to the Lake District, but also includes the different landscape of North Yorkshire farther east. The variety of landscape is one of the attractions of the route.

The South Downs Way in southern England is not so very far from London. I have walked the last nine mile stretch along the Seven Sisters and Beachy Head into Eastbourne. That is a magnificent walk along the white cliffs, but very unlike 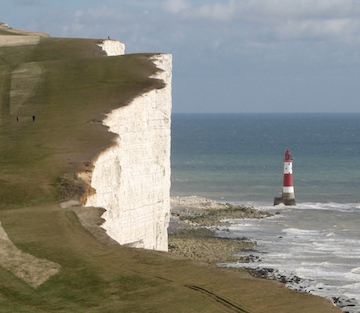 the rest of the walk. Based on what I have read, this could be a very nice walk with convenient access and forgiving terrain.

If all of this sounds too tame and you have three months to spare, consider doing the walk from Lands End to John O’Groats. That requires a 1,111 mile walk. Part of the route follows the Pennine Way. I met a couple from Australia there who had gotten leave from their jobs to take three months to do the whole route. Their routine was to walk six days a week and take one day off. I last saw them on the border between England and Scotland when they still had over 400 miles to go. (See The Walking Englishman for a detailed description of a similar itinerary.)