I’m now generating this site using the Hugo Apéro theme. I chose to look for a new theme for this site for three reasons.

I’m happy with the result.

Finding Some Images to Dress Up the Site

The Apéro theme encourages me to add more images associated with pages on the site. So I had a good time looking for images to use. I have featured photos of gothic grotesques from the Sterling Library and Sterling Law Building at Yale. I have walked between these two buildings thousands of times on Wall Street. There were a lot of gothic decorations included during the explosion of academic gothic buildings at Yale during the depression. The most fanciful are on Sterling Law. The scene of a professor in front of a class that is the heading for the blog page is directly over the main entrance to the building. Actually there are two images. One is the class active and eager at the start of the day and the other is a bunch of tired and sleeping students at the end of the day. 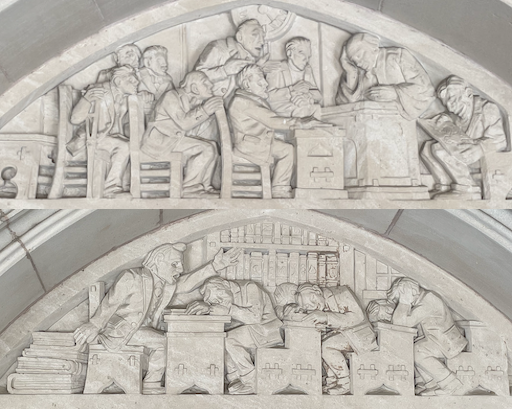 For the landing page I have a grotesque from the gallery in the Library. In true grotesque fashion it lampoons the negative image of a callow Yale student with his mug of beer, cigar, and girlie picture. Perhaps I’ll reconsider whether this is the image I want to lead with.

The Library gallery has an array of students carved in stone. In the corner opposite there is one of my favorites: a student with an open book where the page says “U R A JOKE”.

For more on the Library gallery, read If These Walls Could Talk or see this video on what’s happening on the other side of Wall Street on the Sterling Law Building:

I plan to use some more photos of these details at Yale. I should point out that usually the only time I noticed these things was when I had out of town visitors who wanted a tour of the campus. Only then would I actually look at the details rather than dashing by on the way to somewhere else.

It has been fun looking through my photos for images to use of Yale, or walking in England, or anything else that might fit in.

Converting to a new Hugo theme has forced me to actually look at the site. I need to fix up some old posts. I have two draft posts related to the Apple Health Kit that I should just go ahead and finish and publish. I’m hoping that the way Apéro separates the blog from Projects or more ephemeral products will inspire me to use the blog more frequently.

Why Did I Choose Apéro?

I didn’t do an exhaustive search. From time to time I have checked out the gallery of Hugo themes. Switching to a new theme is an investment in time, and I wasn’t confident it would be worth the effort. I have been seeing lots of examples of people in the R crowd using the Academic theme so I was considering that. Then I saw an announcement of a coming talk by Alison Hill that mentioned Apéro. I had recently given a talk to our staff group at work on creating a web presence and based that mostly on a talk by Alison Hill and Desirée De Leon. I’ve been getting most of my tips on Blogdown from reading Alison’s posts so I felt like diving into Apéro wouldn’t be too risky. I think the talk at the end of May seems like it’s the coming out of Apéro so there are not yet a lot of instructions on how to use the theme. I was jumping the gun a bit and appropriately paid a wee price of additional time and frustration. But adapting to the theme has mostly been entertaining and the pain and frustration has encouraged me to develop my weak GitHub skills. I had to dust off Happy Git and try again to learn some basic skills. I even took Jenny Bryan’s advice and started using GitKracken.

As discussed above, I was particularly attracted to the place Apéro would provide for non-blog content. I have more to learn about how to take advantage of those features. What I have done so far with the Project and Collections menus is just a first attempt at exploring what’s possible.

What Have I Learned While Updating

I decided to follow Alison Hill’s advice and have my blogdown knit .Rmd files to .md rather than to .html. And I now use the knitr button to manually knit the page. It no longer automatically knits on save. The .md files are converted to .html by Hugo running on Netlify. I accomplished this change by adding to the .RProfile file in my blog’s main folder:

I have been struggling with the issue of going from .Rmd to .md (markdown), which in turn is converted into html by Hugo, versus the normal process with .Rmd which is for the knitr code to use pandoc to turn it directly into html. I’ve been a bit confused by all this.

Alison Hill’s advice (supported by others such as Maelle Salmon) is to have blogdown produce only a .md file rather than html and to leave the production of html to Hugo (which uses Goldmark markdown) to produce the html page.

I used to agonize over which file extension to use. But now I am squarely in .Rmarkdown camp with Maëlle- I like knitting to .markdown and wish this was easier in blogdown; see: https://github.com/rstudio/blogdown/issues/530
https://alison.rbind.io/post/new-year-new-blogdown/

I tried going directly to markdown for a while and it was working OK. But then I realized that I no longer had a table of contents at the top of any of my posts. I like to have toc as an option. So I changed my .RProfile for the blog so that it no longer relied on .md files:

When the method was “markdown” in each post entry bundle I had an index.Rmd file and index.md. After changing to “html” I now have index.Rmd and index.html.

I will try this way for a while to see how I like it. Maybe I will discover new reasons why I should prefer markdown to html.

When blogdown is creating the html directly (via knitr and pandoc), it seems to have some options that are not available from the standard Goldmark markdown used by Hugo. The only thing I’m sure of is that I don’t fully undersetand the issues involved.